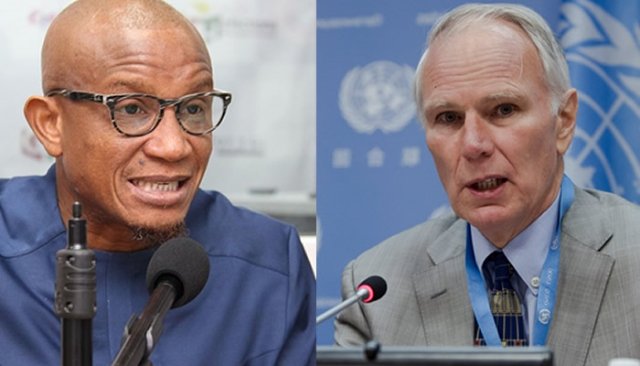 Government has dismissed remarks by UN Special Rapporteur Philip Alston that its flagship policies are highfaluting but not feasible. Mr Alston had

Government has dismissed remarks by UN Special Rapporteur Philip Alston that its flagship policies are highfaluting but not feasible.

Mr Alston had doubted the ability of the current New Patriotic Party (NPP) administration to successfully execute flagship projects like the one-district-one-factory and one-village-one-dam, suggesting that such programmes, while attractive on the surface, achieve very little in principle.

“Ghanaian politicians are maybe world champions at creating memorable slogans that are really good. [One District], one factory;

Ahafo News 0 November 29, 2022
Fire ravages Kantamanto as fire workers request for tankers to douse inferno [...]
Read More
one million dollars, et cetera. I see no reason to be that optimistic. There is a lot of data as to whether you can build one factory in each district, how much employment is going to be generated and the likelihood of all of these programmes being able to get off the ground and running in a short period of time is questionable,” Mr Alston had said.

Mr Alston, the UN’s Special Rapporteur on Extreme Poverty and Human Rights, was briefing the media on his preliminary findings after assessing the effectiveness of efforts by successive governments to tackle extreme poverty and inequality in the country.

However, in sharp rebuttal Information Minister Mustapha Abdul Hamid says the remarks by the UN Special Rapporteur are baseless.

He said the comments by the UN official reflects a “misunderstanding of the fundamental philosophy that has under-girded the development agenda” of President Akufo-Addo.

The Information Minister added: “It is important to state that the report [by the UN Rapporteur] is basically a re-hash of the social problems that have bedeviled this country for generations like issues of streetism, the phenomenon of head porterage and the endemic poverty that characterises the three regions of the north and the coastal belts of Ghana especially.”

He said it was in direct response to these problems that the President initiated programmes of the three development authorities to ensure a more penetrative solution to the problem of poverty in every constituency.

“Our $1 million per constituency seeks to put money that was hitherto applied to the development of the country whimsically and indiscriminately… directly into the constituencies allowing for a better use of those resources,” the Minister noted.