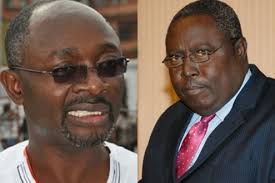 Amidu Gets Set With Woyome

Special Prosecutor, Martin Alamisi Burns Kaiser Amidu, has reportedly hit the ground running by going for details of a high-profile corruption case that rocked the country in 2011.

Details are sketchy, but information reaching ahafonews.com indicates that the Special Prosecutor, who is noted for his stance on corruption issues, appears to have settled on the Woyome GH¢51.2 million scandal as his first national assignment.

The paper learnt that Mr Amidu, a former Attorney General and Minister of Justice, has taken over the official files from the investigative authorities and is set to charge all those who might be implicated in the scandal.

He has always maintained that the National Democratic Congress (NDC) financier, Alfred Agbesi Woyome, should not go down alone in the infamous judgment debt scandal; and recently at his vetting, he reiterated the same position.

“If we are going to prosecute, we should prosecute everybody involved and not Woyome alone,” Mr. Amidu had maintained at the Appointments Committee of Parliament on February 13.

The NDC bankroller, who fraudulently walked away with GH¢51.2 million for no work done, was said to have been aided by some staff of the Attorney General’s Department under Betty Mould-Iddrisu.

Some of the payments went into bank accounts of some staff at the Department and their wives, as well as some NDC gurus.

A few days to the December 7, 2016 general elections which saw the defeat of Mahama’s NDC government, the New Patriotic Party (NPP) released a list containing the alleged beneficiaries of Mr. Woyome’s booty.

The GH¢51.2 million was fraudulently paid to the NDC man in 2010 by the Mills/Mahama NDC government on the instructions of then Attorney General, Betty Mould Iddrisu, and her deputy, Ebo Barton-Odro.

The late Professor Kofi Awoonor, who was the Chairman of the Council of State, allegedly received Woyome’s booty.

“On 8th February 2011, the NDC Greater Accra Regional Chairman, in a receipt, penned in his own handwriting, Mr Ade Coker was given GH¢30,000 by Woyome. The handwritten receipt reads, ‘Received from Consul Afred Woyome an amount of GH¢30,000.00,’ Signed Ade Coker 8/2/11. Asiedu Nketia is also listed as a beneficiary of the Woyome cash. For example, on 2nd September, 2011, he personally received GH¢20,000 from Mr Woyome. It was a cash cheque with serial number 727292,” the NPP stated.

Woyome also allegedly gave GH¢15,000 to the NDC office in Hohoe, Volta Region; GH¢42,000 to the party for the purchase of motorbikes; GH¢30,000 to renovate (NDC) party office and another GH¢1 million to the same party.

“On 15th February, 2011, a one-million Ghana-cedi cheque was paid into the Unibank Ghana Ltd account of the NDC. We have a copy of the exact ADB cheque, which carries the No. 230051. Woyome’s bank statement shows that that cheque was cleared the very next day,” the party claimed.

“There is also payment of GH¢60,000 from Woyome to Steve Kpordzie, who was at the time the Managing Director of ADB. This raises serious questions over propriety. What did the Bank Manager do to deserve a cash payment of that colossal amount?

It was Mr Amidu’s efforts that led to the declaration by the Supreme Court that Mr Woyome should be made to refund the huge amount he unlawfully took from the state.

It was also in the course of delivering the Supreme Court judgement that a member of the panel – Justice Jones Victor Dotse – described the deal as a case of ‘create, loot and share,’ which has become a negative political mantra used against the NDC ever since – to connote the supposed corrupt deals of the party.

Bizarrely, a criminal trial mounted against Mr. Woyome collapsed after the high court judge, John Ajet-Nassam, acquitted and discharged him for lack of evidence.

During his vetting, Mr. Amidu (fondly called Citizen Vigilante for his anti-corruption posture) had said, “As Attorney General, I had said that Woyome cannot be prosecuted alone and that all his accomplices must be prosecuted.”

He stopped short of naming the accomplices, but said that as the AG he met his staff to deliberate on the Woyome issues and “they all agreed that part of the fault is from this house (the Attorney General’s Department).”

He had also said that the Woyome case was the main reason why the NDC hounded him out of office as the AG, claiming, “If I had prosecuted that case, together with the accomplices, the result would have been different and my perception is that the prosecution was bundled to get that guy out.”